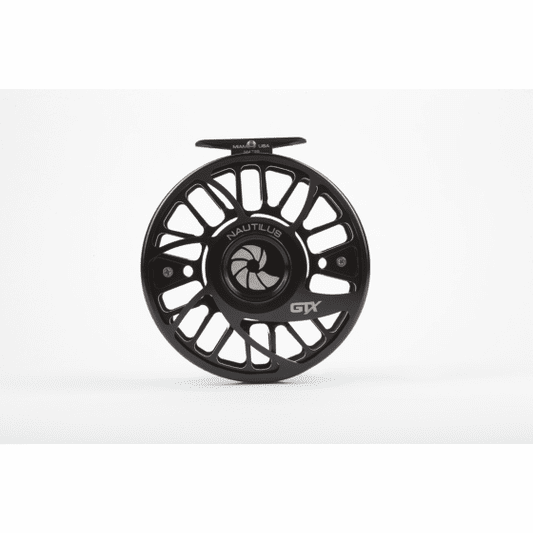 The Nautilus GTX was built to accomplish one task: to put the brakes on the fastest, strongest, and most ferocious fish on the planet.

With a maximum drag of 30lbs, this reel will go head-to-head with your terminal tackle.

Think of this reel as an arrester bed for runaway trucks on the highway. The truck is the fish you’ve hooked, and the GTX is your escape ramp. That is the mindset Nautilus had when crafting this beast of a reel. So, how did they create such immense stopping power and strength in an 8.7 ounce reel?

Lets back up a little bit. The GTX is a 5 inch diameter fly fishing reel with a 1.1 inch wide spool that can hold up to 500 yards of 60 lb braid. That's a lot in a narrow frame. You will also be stunned with how light the spool is, especially in a reel that is designed to turn a fish that is as big as you are. As you’ve come to expect from a Nautilus, the reel is intricately machined with their Giga Spool Design to ensure strength, optimal line pickup, and corrosion resistance.

Now that we’ve been introduced, what’s the deal with this stopping power?

For long-time Nautilus fans, think of this reel has a hybrid between an NV-G and a CCFX2, but on steroids. For those who aren’t as familiar with previous Nautilus reels, Nautilus added a new pressure spring that sits between two aluminum discs that rotate together, which allows for even pressure to be applied to the drag surfaces at all times.

This new dual drag system has an oversized carbon fiber disc on one side and a cork/Kevlar/carbon hybrid disc on the other. This creates quite the cocktail of stopping power materials. The cork acts as cork does in other drag systems: largely as a compression material to ensure a smooth transition from fish off to fish on! Carbon fiber gives you that Nautilus smoothness, and the new Kevlar mid layer adds a lot of rigidity to the drag surface, which not only spreads the friction out evenly but also dampens vibrations and reduces heat. So, this system is more effective and also keeps itself in check. In other words it will last longer than previous big-game drag systems.

If you are chasing the strongest, fastest fish in the salt, look no further than this reel. With quality comes price but I guarantee that when you are hooked up to a behemoth you want to count on every aspect of the reel you’re using, and you can relax knowing you’re in the hands of the Nautilus GTX Reel.

The GTX Pentadrag braking system is a brand new design that is best described as a hybrid NV-G/CCF-X2/X-Series drag on steroids. The new Pentadrag features 3 cork and carbon fiber surfaces and two free floating carbon fiber surfaces that are topped with a Kevlar®/carbon fiber hybrid precision plate that ensures even pressure at all points of the drag surfaces. The cork acts as an insulation and compression material to ensure a smooth drag transition while the carbon fiber delivers the market-leading overall smoothness that Nautilus Reels is known for.

To control the drag tension, Nautilus designed the all new GripTorq drag knob. Intricately machined on 4 axes to promote light weight, strength and more grip than on any other drag knob in the industry. The GTX GripTorq drag knob measures 1.9" in diameter.

The Nautilus Reels GTX delivers 8.7 ounces of optimized fighting power at an MSRP of $1300.00 for the reel and $575.00 for the spool. Available in matte black or brushed titanium anodizing.

Nautilus Reels are proudly made in Miami, Florida.