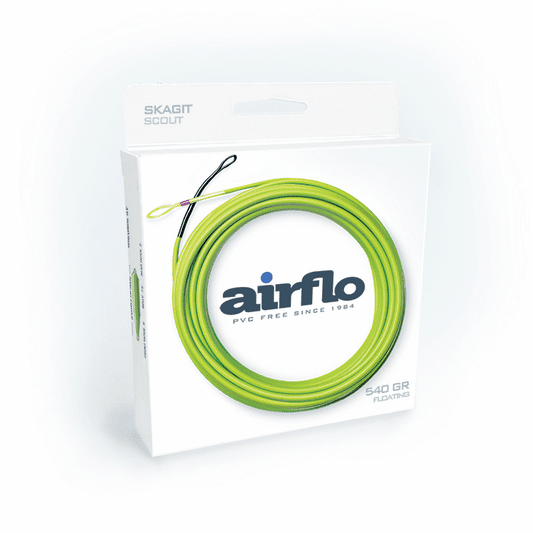 With the massive growth of two handed casting over the last few decades in the Pacific Northwest, we have seen the single handed 7 and 8 weight rods pushed to the bench a bit more on the mid to large sized rivers we fish so regularly in this region. There is nothing wrong with it; two-handed rods have drastically increased the amount of water you can cover effectively and efficiently. They have also allowed us the opportunity to fish with heavy tips and heavy flies with great ease, where the single-handed rods used to suffer. However, it wasn't necessarily the rod that was to blame, but more the lines we were using with them. Recently, lines such as the Airflo Skagit Scout have been developed to allow steelhead, salmon, and trout fisherman the opportunity to use their single-handed fly rods with any sink tip in their bag or fly in their box. It is lines such as this that have reinvigorated the culture of single-handed rods and brought back the joy of using them for all of the fish in our rivers.

With a short, powerful switch Skagit taper, these Skagit heads bring the same ability to the single-handed rod that they brought to the spey rod. Skagit Heads are dense lines that allow us to turn over heavy flies and tips with ease. By creating lines such as the Airflo Skagit Scout, the traditional spey Skagit head has been adapted to be used on single handed fly rods, giving you all of the benefits and power in one hand, as opposed to two. However, this line also fishes tremendously on switch rods as well. The shorter length of these heads (13-18.5 feet) makes more efficient roll casting and spey casting with a single handed rod because the short head allows the fly to stay stationary for a longer period of time. In Skagit casting, this is known as the “sustained anchor.”

Use the Skagit Scout Head with skating flies and small traditionals or sink tips and tube flies and you will love the casting capabilities at your fingertips. These heads are also great for the trout fisherman, particularly with streamers or swung soft hackles, but even dry flies in certain scenarios as well.

The Airflo Skagit Scout features Airflo’s Power Core technology which means the core of this line only has a 6% stretch. This not only makes it incredibly supple, but it also drastically increases your hook setting capabilities. This line also features Super-DRI technology, meaning the Airflo Skagit Scout is built to repel dirt, water, and surface scum better than any other line, which makes it shoot better and not break down as quickly over time.